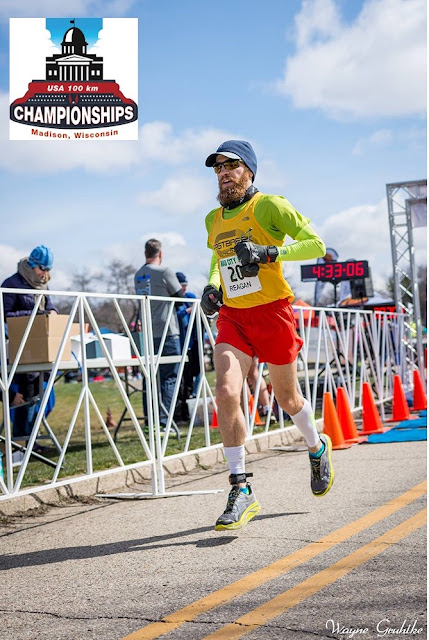 Time for reflection is an essential part of training I often take for granted when getting caught up in daily training and race preparation. At the end of huge training blocks/cycles that are often highlighted with marquee races, I've found solace in taking time afterward to reflect on the body of work. Our sport is a spiritual endeavor that combines mental and physical dedication on a daily, often hourly basis. Disconnecting from the body of work is difficult during training, but has become a meditative activity for me during periods of rest/recovery thereafter.

Bernard Heinrich goes into great detail of describing his experience at the 1981 USATF 100K championships throughout his engaging novel Racing the Antelope. At the age of 41, Heinrich had run one 50K and decided it was time to line up against experienced ultra runners like Barney Klecker (USA 50m record holder), Don Paul, and Ray Krolewicz at the monster 100K distance.

The ultra running community is awesome! Camille Herron had great feedback about this race; thus I knew it would be a great place to debut at 100K (being a marathon roadie convert as well).  Our race director Timo Yanacheck gave us so much information in the weeks leading up the the Mad City 100K and treated us so well during the race weekend. After a few preview runs on the course, I felt confident my last nine months of training had prepared me well for the race.

The taper leading in was well timed based on how much pop I had in my legs and my drastically improved cadence in the ladder of this training cycle. My energy stores were definitely rock and roll! The closer I got to the race, the more confident I was feeling about the distance.  After completing a few 25m/40m back to back XLs at 6:20-6:35 pace and a 6:25 FKT attempt of the Art Loeb trail, I felt confident the gas tank was there.  My leg speed was definitely on point, coming off a 1:04.29 half marathon in January and a 33rd place finish at the 2016 Olympic Trials Marathon in a talented field.

We had a pretty chilly race morning at 19 degrees with the temperature never getting warmer than 32.The gun went off and Geoffrey Burns was nowhere in sight by the end of the first 10K, but Timmy Parr and I shared some early miles at 6:24 average for the first 20K. I really enjoyed my time getting into a rhythm during some good conversation early on with Tim.  The 20K-100K mark was pretty darn lonely, but I focused on maintaining a solid rhythm and perceived exertion around 150-155 BPM for the first 40K (no HR monitor during race). My first four loops were really consistent: 6:24, 6:21, 6:25, 6:20. At the 45K mark, I got caught up in the 50K race (between Tyler Sigl and Tyler Andrews) before I realized they couldn't possibly be in the 100K, doh! My 5th and 6th loops were far too fast: 6:04, 6:08. I settled back into a solid rhythm for loops 7 and 8: 6:15, 6:28. At 80K, I made a conservative decision to take the next 15K easy and blast the last 5K. I had far too much left with two miles to go, closing mile 61 and 62 in 6:14/6:05 respectively.

I was satisfied with my debut at 100K distance. The goal is always to win, but I'm happy with my ability to stick with an evenly paced race plan. Geoff ran an incredibly gutsy race for the championship win and the 3rd fastest 100K by a North American.  On a slightly faster course with more competitors in my neighborhood, I'm confident in attacking 6:15-6:18 per mile on my second attempt.

I don't race very often, but make sure to be primed and ready to roll when stepping on the line. The current vision is to pick 4-5 high profile races each year.  I make sure to get in multiple cycles of training that are heavily focused on specificity prior to each major event.  From late April to August, I'm going to continue the birthing of my trail legs (dubbed by Daniel Hamilton and Morgan Elliot).  I'll be stomping around Chattanooga, TN and Black Mountain, NC a lot this summer, enjoying time training in the mountains with friends.

I'm planning to race the USATF 50K Trail National Championships in Muir Beach, CA on August 27th and possibly the USATF 1/2 Marathon Championships in Bellingham, WA on October 15th.  I'll be lining up for some Wild Trails events in Chattanooga this summer as well. For the first time since 2008, I'm going to do some cross country races in the fall! If selected by the M.U.T Running Council, I would be honored to finish my year representing the USA at the IAU 100K World Championships in Los Alcazares, Spain.

My full racing schedule can be viewed at patrickreaganrunning.blogspot.com

Thanks to Fastbreak Athletics, The North Face, CEP Compression, and Ultimate Direction for the support. During the race, I used the UD Amp and body bottles to stay hydrated, the TNF Better Than Naked line for my race attire, and CEP Ultra Light Leg Sleeves/Dynamic Compression socks.

Posted by Patrick Reagan at 1:32 PM